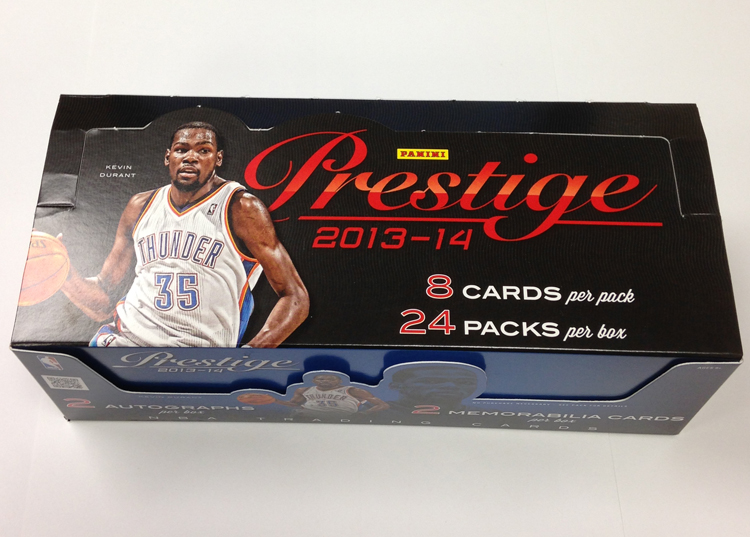 The stage of NBA is now set as the 2013 – 14 season begins today, the most anticipated match up of course is the Heat vs Bulls and this game will validate if Derrick Rose return to the hard court is for real (#theReturn). That one is for the introduction but the main reason for this post is the upcoming launch of 2013/14 Panini Prestige Basketball which is expected to be released on November 6, 2013. The Knight’s Lance blog posted several samples of this product.

Base Card – the design is somehow similar to its 2010/11 version only that the player’s name is now written at the bottom of the card.

Rookie Card – having a RC label on the Rookie Card is always cool looking.

Bonus Shots Parallel – this is the ordinary version of the parallel. 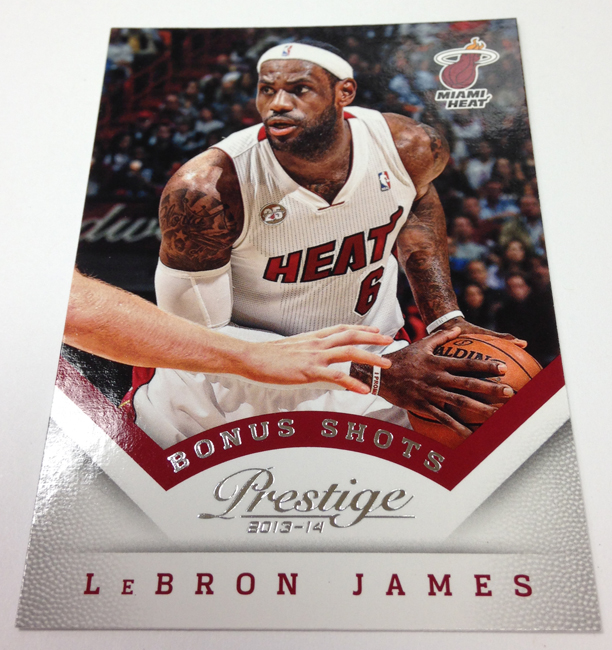 Bonus Shots Red – the Red or the Ruby version of the parallel.

Franchise Favorites – showcasing the franchise player for each team.

Connections – the past and present Superstars of the featured team.

Prestigious Posts – the premier big men of the NBA.

Prestigious Pioneers – as the name suggests, these are the pioneer of the NBA. 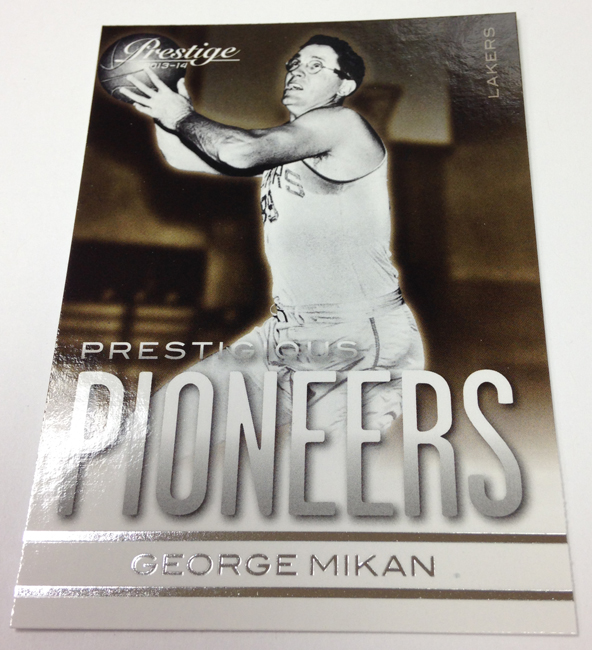 Prestigious Pros – This shiny set are always looks cool and most likely there are also parallels just like the previous years.

Prestigious Picks – this is for the Rookie version.

Playmakers – Most likely, this set is one per case… tough to pull. 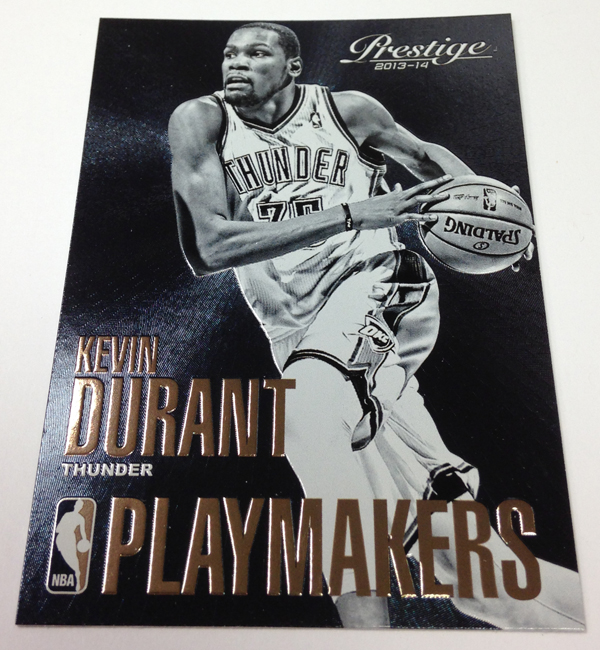 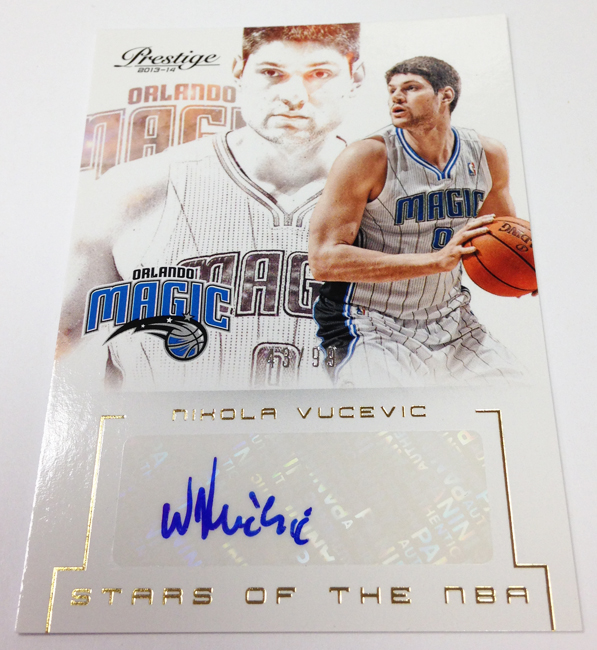 Distinctive Ink – like last year, this set will be a mix of past and present players.

Old School Autographs – Like the background retro design and expect Bird and Magic autos from this set.

NBA Materials – the design is similar to Flawless. 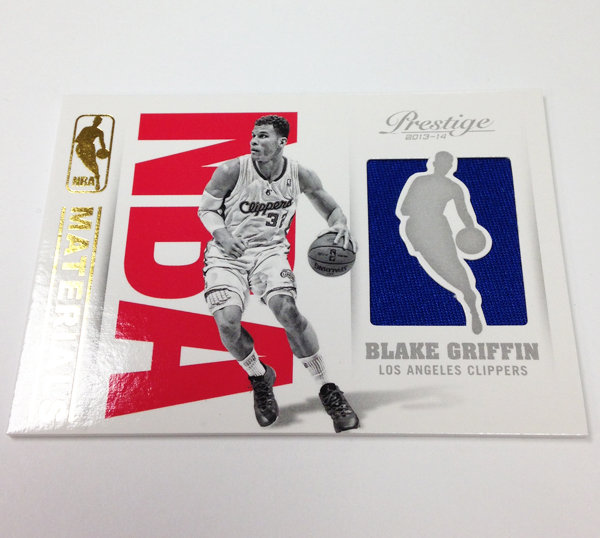 Kyrie Irving is back with his latest installment of Uncle Drew series and this time the Chapter 3 episode.

In Chapter 3, Uncle Drew convinces Lights to head back down to the park and find his groove again, despite Betty Lou doing everything she can to stop the old man from breaking a bone. Uncle Drew and Lights start flowing again like the good ol’ days before Betty Lou nearly stops the game, scolding them for disobeying. From there, someone insults her and she gets in on the action.

In real life, it appears that it was Nate Robinson who persuaded Kyrie to make him part of the new video.

Dime: How did you get involved with Uncle Drew?
Nate Robinson: Funny story, I got involved by just watching, laughing and joking about it. I thought i’d be a good supporting actor in the commercial. I saw Kyrie at a game at the free throw line and I was like “Man what’s up with that Uncle Drew, I’m tryna be down with the commercial.” He was shooting a free throw and I kept bugging him. I hit him on Twitter one time too and then met up with him again in New York and he was like “Man, can you stay in character?” I was like “Come on man, it’s me you’re talking too.” It was pretty cool. I’m excited.

Wow! It was really yesterday and the other day that Panini has launched Hoops and Flawless respectively. Today, In Knight’s Lance blog, Panini now has another upcoming basketball product and which according to them ignited the hobby last year because of the shiny Gold parallels. Watch out for the arrival of 2013-14 Panini Prizm Basketball with its new Prizm Black 1 of 1 card.

Each box will contain twenty packs and collectors will get two autographs plus five Prizm parallels (which is the main chase of Prizm Basketball Hobby Box). Similar to last year, this product will also have its own retail version and its own parallels to offer the Green and the Blue Prizms (much more color to rainbow collectors). The 2013-14 Panini Prizm Basketball is expected to hit the LCS shelves on December 18, 2013.

Apart from the ultra expensive Flawless, Panini is also scheduled to release its 2013/14 NBA Hoops (probably today) and this year it will be shipped out in jumbo packs. This product promises lots of inserts and ultra rare parallel such as Artist’s Proof Black which will be a true 1 of 1 card. The one card which I like from this Hoops is the Champions card and hopefully I will have it soon to be added on my collection.

For those NBA card collectors in the Philippines who like this product, you may join a group break hosted by some forum member at NBACARDSPH.COM.

Below is the product breakdown.

Each Box will also contain the following:

The first-ever Hoops Hobby Jumbo pack! Each pack has 50 cards, filled to the brim with inserts, parallels, and the first live card s of the 2013 NBA Draft Class!

The return of Kobe’s All-Rookie Team, one of th e most valuable short-printed inserts in Hoops!

HOOPS AUTHENTICS: Get closer to the game with the debut of Hoops Authentics, the first game-used memorabilia sets in Panini Hoops history!

HIGHLIGHTS: Look for the ultra-rare insert set showcasing the best moments of the 2012-13 season, including the epic Miami Heat winning streak and Steve Nash surpassing the 10,000 assist mark!

ARTIST’S PROOF BLACK: The return of 1-of-1 Artist’s Proof parallels!

The most expensive product in the history of trading card is now live as Panini launches its 2012-13 Flawless Basketball. So indeed as what was shown on their Youtube teaser, Flawless will be shipped out in a briefcase and it means more shipping fee for international box/case busters.

On Knight’s Lance website (Panini official blog), three briefcases were opened and each of those has big time player to offer. The first case (I mean briefcase) it has Damian Lillard auto in Blazers uniform, second a Kobe emerald auto and third a Kobe patch auto. Currently, Flawless is out of stock as I checked it in Dacardworld website possibly because of tons of group breaks hosted in several sites.

Sideline: I thought I really know NBA basketball but it was really my first time to see Gary Payton in Boston Celtics uniform.