Kevin Durant’s decision to move to the Golden State Warriors probably the best decision he ever made in his NBA career. In Game 3 of the NBA Finals he demonstrated once again how special he is as his Dubs beat the Cavs, 110-102.

The man who is also known as “the Durantalla” dropped his Playoff career-high of 43 points who is also sharp shooting in the field as he converted 15 of his 23 attempts. Durant also grabbed 13 rebounds and dished out seven assists to lead the Warriors past the Cavs and move closer to win another NBA championship trophy in two straight years.

The Cavs was successful on shutting down Stephen Curry who was spectacular in the first two NBA Finals game but in Game 3, the former NBA Most Valuable Player who wears jersey number 35 took over.

In Game 3 the long range shooting skills of Stephen Curry was absent in the game. He tortured Cleveland in Game 1 and 2 but tonight the the rim seems like went close to Curry as he shoots 3-of-16 from the field and only managed to score 11 points.

However, it was Curry’s acrobatic layup in the 2:58 mark of the fourth quarter and a follow-up three-pointer that changed the complexion of the game. That gave way to the dagger deep three launched by Durant as the momentum shifted to their side.

Durant’s three-pointer late in the game is similar to what he did during last year’s NBA Finals and it produced the same result, a 3-0 commanding series lead. That long bomb he launched from 33 feet gave the Warriors a six-point lead with only 49.8 seconds in the fourth quarter.

LeBron James led his Cleveland Cavaliers team with another triple-double performance. James made 33 points, 10 rebounds and 11 assists who converted a three-pointer that could potentially salvage his squad.

The Cavs entered tonight’s game down 0-2, their home town fans expected that they will come-up strong and they didn’t disappoint.

They started Game 3 surging with a 16-4 blast behind the hot shooting of Kevin Love and JR Smith. They were also seen playing the same physical game which they did back in Game 1 where they almost won. 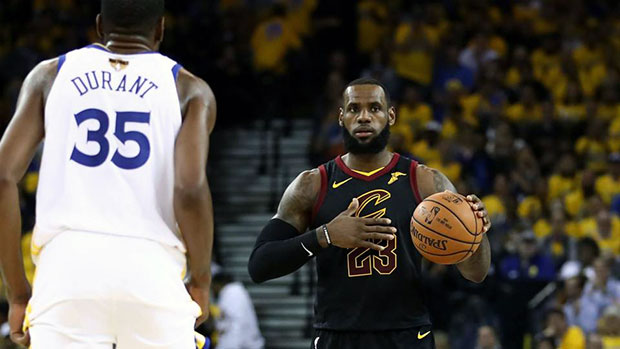