PBA will start its new year by recognizing its brightest basketball players during the 43rd PBA season.

Most Valuable Player, Rookie of the Year, Coach of the Year, Mythical Five are just few of the awards to be given away in Philippine Arena.

June Mar Fajardo is on his way to become the first ever player to win five MVP awards. Yet, in his way is Stanley Pringle who had a breakout season with the NorthPort Batang Pier.

Pringle became the focal point of his team especially after the departure of Terrence Romeo. With his proven scoring abilities, he was tapped by Gilas Pilipinas to join its international campaign like the FIBA 3X3, 2018 Asian Games and the fifth window of the 2019 World Cup Asian Qualifiers.

Fajardo on the other hand, after missing several games in the 2018 PBA Governors’ Cup due to injury and wasn’t able to led SMB back to the championship round in the season-ending tourney, he slipped in the race a bit but still in a good chance to still take home the trophy for the fifth straight times.

Fajardo was named as the Best Player of the Conference during the 2017-18 PBA Philippine Cup and in the 2018 PBA Commissioner’s Cup. Likewise, he led the Beermen to win championship in the first conference while a runner-up in the second conference.

For the Rookie of the Year award, it seems that Jason Perkins will win it all the way. Christian Standhardinger and Kiefer Ravena most likely in a distant second and third place.

For the Coach of the Year, it’s a tight battle between the coaches under the SMC group. Leo Austria, Chito Victolero and Tim Cone are the top names on the list. 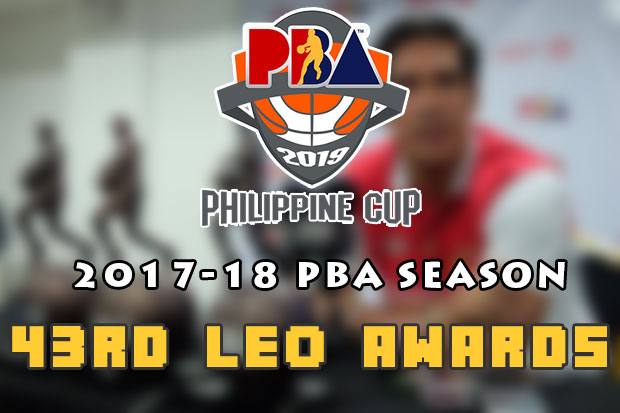 Here is the complete list of the 43rd Season Leo Awards winner: