The Ateneo de Manila University Blue Eagles is scheduled for a Finals head-to-head game against the University of the Philippines Fighting Maroons at 3:30 P.M. on December 1, 2018 live from the Mall of Asia Arena.

Note: The above video may not available to some countries. Alternatively you can watch live stream at ABS-CBN Sports or iWantTV.

Dubbed as the “Battle of the Katipunan” since both universities can be found in the long stretched Katipunan Avenue in Quezon City.

The Blue Eagles will try to defend its UAAP crown against the hungry Fighting Maroons, their game 1 is set in front of the expected mammoth crowd that will flock the Mall of Asia in Arena in Pasay City.

Ateneo will be entering this game well rested after they disposed the Far Eastern University Tamaraws in their semi-finals round. The Blue Eagles carries a win-once advantage over the Tamaraws and they immediately executed that to avoid any shift of momentum.

Thirdy Ravena was spectacular in that game as he dropped his usual all-around game. Yet, in their Final Four bout, he was aggressive in scoring as registered 22 points, 7 rebounds and 4 assists along with his two swipes.

Angelo Kouame as usual had his double-double performance in that match as he logged 18 points and 11 rebounds.

After 32 years the University of the Philippines is back in the UAAP promise land. They were able to defy the odds as they won back-to-back against the Adamson University Soaring Falcons.

Their knockout match needed an extra period to decide the worthy opponent of the Blue Eagles.

Paul Desiderio seems like that he now getting used to be the go-to-guy in crucial moments of the game. In order for the Fighting Maroons replicate that success, one of their priorities is to make the score close in their today’s 3:30 PM game.

Adamson head coach Franz Pumaren had his prediction in Game 1 and he sees that the game will favor to Ateneo.

“Advantage right now is Ateneo. Why? UP’s gonna be tired of the emotions, everything physically,” Pumaren said.

Yet, those fans who are from the UP community will say otherwise.

Soaring Falcons coach also aware of that and he credited UP fans of their thunderous cheers especially in their last game of the season. 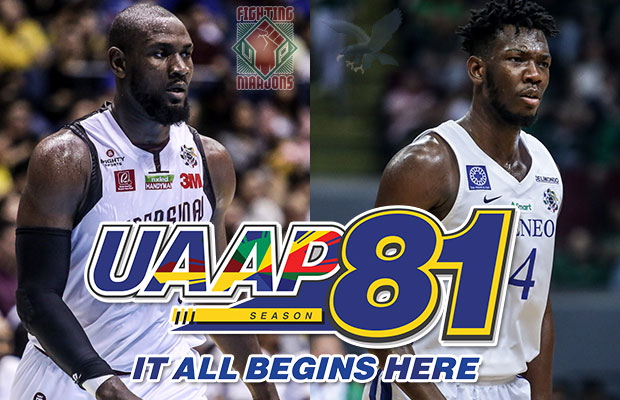 “[The crowd’s] just like a typhoon surge that is hard to stop. But the only question is when will the surge stop? Kasi they won purely because of heart and because of the support of the community,” Pumaren shared.