Beermen Second Half Barrage Too Much For Phoenix

The San Miguel Beermen used the second half to take over Game 2 and propel their team to victory versus the Phoenix Pulse Fuel Masters, 92-82.

During the series opener it was Alex Cabagnot who led the Beermen perimeter attack, in Game 2 it was Marcio Lassiter.

This time around he’s no longer a mere defender of Matthew Wright but in his usual shooter form. He logged 24 points and grabbed 7 rebounds.

Yet it was really the enigmatic Terrence Romeo who kept the Beermen within in striking distance most especially in the fourth quarter where he scored eight points.

Then San Miguel’s mainstays finished it off with either a layup or a three-pointer.

“We’re lucky we were able to escape from this game,” said Beermen coach Leo Austria.

“We knew from the start that this would be a hard game. Very evident in the first half. Everything that we do, they knew how to stop us. Fortunately, our players refused to lose. They know the importance of this game, maybe because of their experience,” added Austria.

Calvin Abueva paced Phoenix with his 16 markers and 10 rebounds along with his three steals mainly came from June Mar Fajardo.

Abueva however got whistled with his last personal foul at the 1:10 minutes mark in fourth. San Miguel was then leading with only four points when Abueva decided to rush to their dugout.

Phoenix was slapped with a technical foul because of Abueva’s action and the other team was given a technical free-throw which Alex Cabagnot took care.

All of the sudden Beermen’s lead ballooned to double-figures and eventually got the commanding 2-0 series lead.

“We’re lucky we were able to escape from this game,” said Beermen coach Leo Austria. 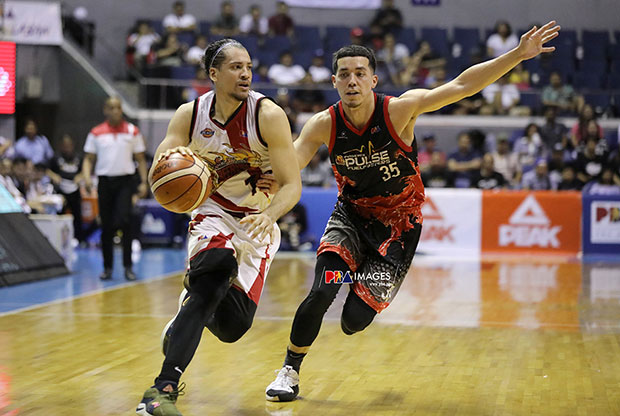