Six Magnolia players scored in double figures led by Ian Sangalang who logged 21 points and nine rebounds but it was really the third year man Jio Jalalon who standout in that match.

Jalalon scored 17 points, 5 rebounds, 6 assists and 5 steals. He was later named as the “Bida Player of the Game”.

On their Sunday’s team practice Jalalon and Mark Barroca told their coach that they’ll play all out and they’re true to their word.

“They told me yesterday they will go all out in this game. Thankful and proud of these two guys,” related said Victolero.

Right after the tip-off, Magnolia were aggressive and immediately made an 11-0 run.

Then Ginebra did a catch-up game the entire ball-game. In the third quarter, that’s the time where the Hotshots scored big-time as they outscored their opponent 30-16.

“So we tied the series,” said Victolero. “Maganda lang mga players ko na-challenge sila. The most important thing here is iyung mindset namin, na we need to go all out in every possession, in offense and defense.”

Magnolia limited the twin towers of Ginebra to only 10 points and 9 rebounds. That the combined effort delivered by Japeth Aguilar and Greg Slaughter.

Surprisingly only one Gin Kings reached to double-figure scoring output and that’s Sol Mercado with his 13 points. 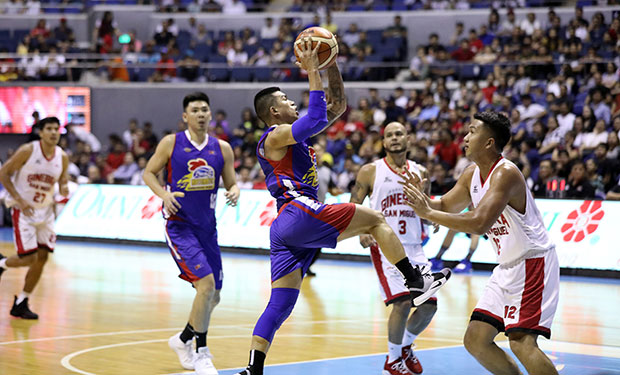