How Can Clarkson, Standhardinger and Pringle Play As Locals For Gilas Pilipinas?

The Samahang Basketbol ng Pilipinas (SBP) will try to move mountains and the heavens as they prepare for the 2019 FIBA World Cup in China later this year. One of their preparations is to assemble the best line-up to compete with the best basketball squads around the world.

With Andray Blatche back in the Gilas roster as the team’s naturalized player, looking at the stats of their last two outings, it shows that they have easily beaten their opponents.

Yet, the tournament that will be held in China which starts on August 31, 2019 will feature the best basketball squads coming from Africa, Europe, Americas, Asia and Oceania. It’s imperative that the group led by Al Panlilio needs to seek the best talents they can find.

As reported earlier by several news outlets, SBP is currently working out to obtain the approval of FIBA to allow Cleveland Cavaliers guard Jordan Clarkson to join team Pilipinas but this time as a local player.

Apart from convincing the International Basketball Federation that Clarkson already had his Philippine passport before he turned 16-years-old, SBP will also use the nation’s constitutional rights.

“We still have to convince the FIBA that the current rule on eligibility doesn’t address our constitutional rights where Filipinos are considered Filipinos by blood, unlike other countries where it’s the place of birth. We exert all efforts to resolve this,” Panlilio told ESPN5 Monday. “And regarding Clarkson and others being considered locals, that’s the hope of the federation.”

If SBP got successful on their appeal, this will also give way to consider San Miguel Beermen forward Christian Standhardinger and NorthPort Batang Pier guard Stanley Pringle.

Clarkson, Standhardinger and Pringle joined forces during the 2018 Asian Games in Indonesia. They helped the team to finish at fifth place.

Back in November 2018, SBP was able to get approval from FIBA to allow Greg Slaughter to join the national squad despite of passport issue. FIBA officials looked on other factors to consider the request. 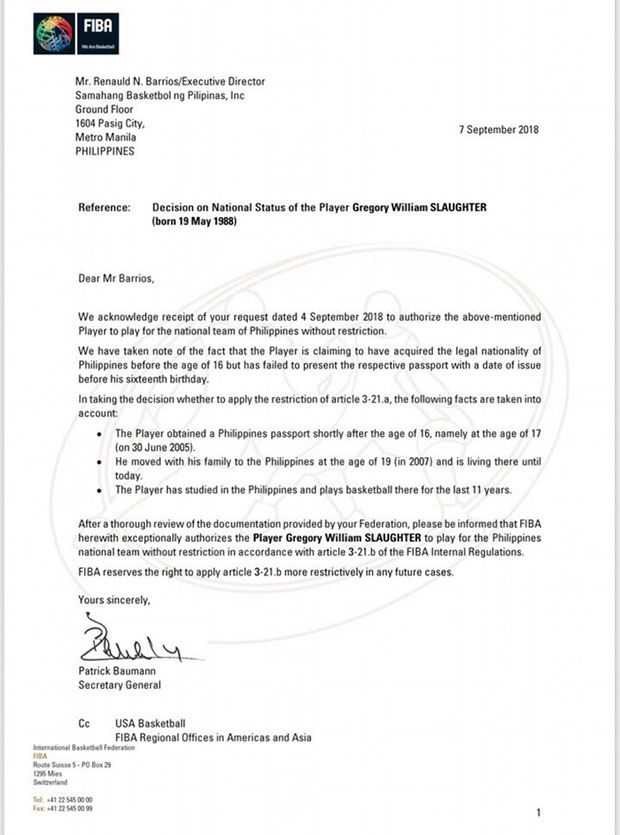 SBP and the entire Filipino basketball fans are hoping for the same result.