Finally, Erram shrug the monkey off his back and log his first victory under coach Yeng Guiao in the PBA.

Erram delivered a double-double performance where he scored 20 points and pulled 10 rebounds along with his five swats.

“He’s starting to settle down, which was not happening in the first two, three games. Medyo uncomfortable pa siya and hindi pa siya nakakakuha ng timing niya. But slowly he’s getting there,” said Guiao.

Also, another newly acquired Marion Magat helped NLEX to secure the victory. The former Alaska Aces delivered his own version of double-double output with his 14 points and 13 rebounds.

“Marion is a pleasant surprise,” stated Guiao. “When we picked him up from the free agency we were actually ready to put him on the reserved list. But after a few days of practice he proved he deserves as place in the lineup.”

The Road Warriors entered the game without their reliable forward JR Quinahan. Magat took advantage of the playing minutes which was given to him and formed a twin-tower for coach Guiao.

Another Road Warriors player who had stellar performance and that’s Kenneth Ighalo who made 19 points and 11 rebounds.

From the get-go, NLEX pounded hard the Columbian Dyip by outscoring them 39-16 in the first quarter.

Yet, the boys of coach Johnadel Cardel responded after the halftime break and almost cancelled out the big lead of NLEX in the opening period.

In the final buzzer of the third quarter, Columbian got the edge against NLEX, 36-17.

In the final quarter, Columbian trimmed down the deficit to only five points after JP Calvo‘s driving layup.

Yet former Kia player Philip Paniamogan drilled his three-pointer to give NLEX its needed separation and eventually won the game.

Jay-R Reyes paced the Columbian Dyip with his 17 points while CJ Perez and Rashawn McCarthy added 16 points each. 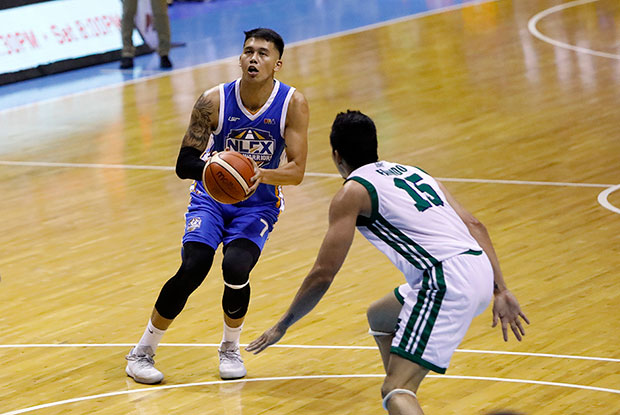