The Rain or Shine Elasto Painters clamped down the Barangay Ginebra San Miguel in Calasiao as they sent them to their back-to-back defeats.

The Gin Kings tried to make a bounce back game after absorbing its first defeat versus the San Miguel Beermen last Sunday failed to make its attempt to return to winning tracks.

Offensive rebounding is the silent weapon of coach Caloy Garcia on beating the boys of coach Tim Cone.

RoS beats Ginebra in cleaning the offensive boards, 27-17. Also, the bench of the Elasto Painters are more productive compared to their opponent and they executed their run-and-gun play to outperform the bigs of Ginebra.

With less than a minute of basketball action the Gin Kings were in there “Never-Say-Die” spirit mode once again as LA Tenorio made a crucial steal. However, his layup was chased by Gabe Norwood and was successfully blocked.

Initially the referee called it as goal tending violation but upon review it was a clean swat. The score was at 79-82 in favor of RoS with only 38.5 seconds remaining.

To make matter worse for Ginebra, instead of giving them the next ball possession as Scottie Thompson was the last person who got the ball after the Norwood block, the refs signaled a jumpball at the center-court.

Coach Tim Cone couldn’t believe and tried to make an appeal but the decision was final.

Ginebra still have one more chance to tie the game when James Yap missed his three-pointer but Gabe Norwood was there again to make the offensive rebound and the Gin Kings has no other option but to commit a foul to stop the clock.

Japeth Aguilar leads Ginebra in scoring with his 19 points along with his eight rebounds while his twin tower Greg Slaughter got 15 points with 12 rebounds but also had a whopping nine turnovers. 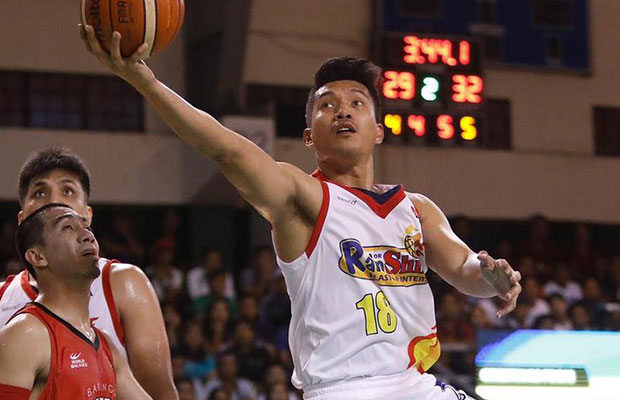