The San Juan Knights is scheduled for a head-to-head Game 3 championship round battle against the Davao Occidental Tigers at 3:00 P.M. on March 20, 2021 live from the Subic Bay Stadium in Subic, Zambales.

Note: Live streaming starts at 3:00 PM (PHI time). Refresh this window on the scheduled time to watch the video.

The series is now reduced to best-of-three series after the Knights took care of Game 2 last Thursday by defeating the Tigers, 70-65. San Juan was given less than 24 hours to make its adjustment after their sorry-loss in Game 1 in the overtime period.

Speaking about game adjustment, one of the moves of Knights’ head coach Randy Alcantara is to have a solid scorer who will come from his bench, and that role was given to this season’s MVP contender John Wilson.

Wilson didn’t disappoint his squad as he led the attack in the second half as San Juan orchestrated a 20-5 run which put Davao Occidental behind for good and eventually captured the victory.

“We treated this game as a knockout game because if we go down 0-2 then it’d be hard for us to make a comeback because the games are non-stop,” said Knights head coach Randy Alcantara.

If San Juan able to do their homework in less than a day and then an A-grade the Tigers should do better as they have one complete day of rest and another extra of fewer than 24 hours to prepare for Game 3. 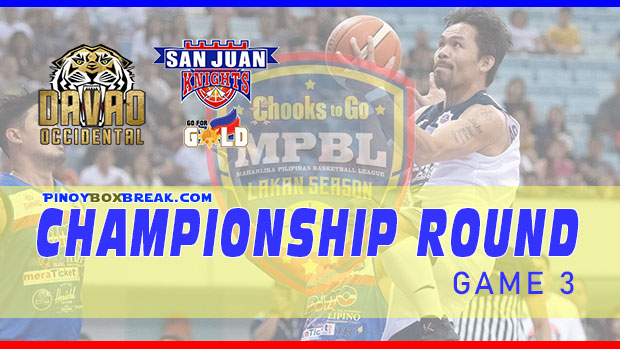