The San Juan Knights is scheduled for a head-to-head Game 4 championship round battle against the Davao Occidental Tigers at 4:00 P.M. on March 21, 2021 live from the Subic Bay Stadium in Subic, Zambales.

Note: Live streaming starts at 4:00 PM (PHI time). Refresh this window on the scheduled time to watch the video.

The Tigers is just a game away to take home the 2019-20 MPBL Lakan Cup championship trophy yet it is expected that the Knights will be in their all-out-war mode to stretch their Final series to a do-or-die game match.

Davao Occidental was so determined to avenge their Game 2 defeat as they unleashed their scoring prowess as early as in the first quarter. They were ahead 41-27 as they entered the second half and then San Juan suddenly woke up.

The Knights orchestrated several scoring runs led by John Wilson and Orlan Wamar with their three-points barrage. San Juan went close and cut the deficit to only three points in the fourth quarter, 53-56.

However, PBA bound Kenneth Mocon and teammate Joseph Terso answered back with their own version of behind-the-arc shots to give their team a much comfortable lead.

San Juan was unable to recover and now they’re back on the drawing boards to design plays to put their championship campaign alive.

“Our defense came through. We gave only 58 points and if we can play defense like this, we have a big chance,” said Tigers head coach Don Dulay. 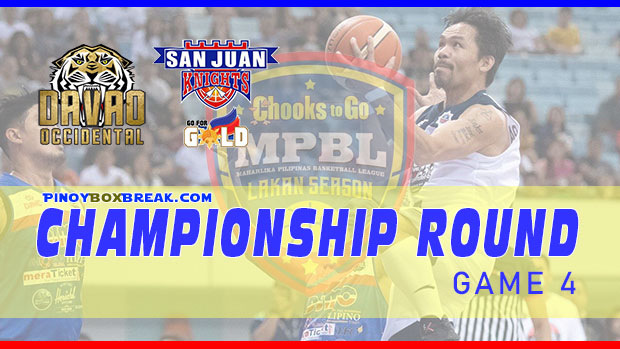