The San Miguel Beermen is scheduled for a best-of-three quarterfinals match against the Talk ‘N Text KaTropa. Game 1 is at 4:30 P.M. on April 6, 2019 live from the Mall of Asia Arena.

The All-Filipino quarterfinals is finally here and for its curtain raiser match it’ll be the KaTropa up against the defending champion, the Beermen.

Right off the bat, it’s a championship atmosphere this afternoon in the MOA Arena.

After the elimination round, SMB found themselves in an unfamiliar territory. This year’s edition of the Philippine Cup they’re in the middle of the standings and doesn’t have the twice to beat advantage.

San Miguel’s forward and former MVP Arwind Santos thinks that other teams will really try to stop them achieving the five-peat in the first conference.

Another interesting scene that fans will witness this 4:30 PM clash is the first meeting of Terrence Romeo up against his former team, the KaTropa.

However for Terrence is just another ordinary playoffs match.

TNT on the other hand almost had the chance to end their elimination round campaign as the number 2 squad which will automatically award them with a twice-to-beat advantage in the quarterfinals.

However their hopes on reaching that goal got spoiled by the surging NorthPort Batang Pier.

Still, they’re a much better team compared to their 2017-18 Philippine Cup version that finished eighth.

Jayson Castro and Troy Rosario combined with 46 points in their first meeting in the first round of the 2019 PBA Philippine Cup. 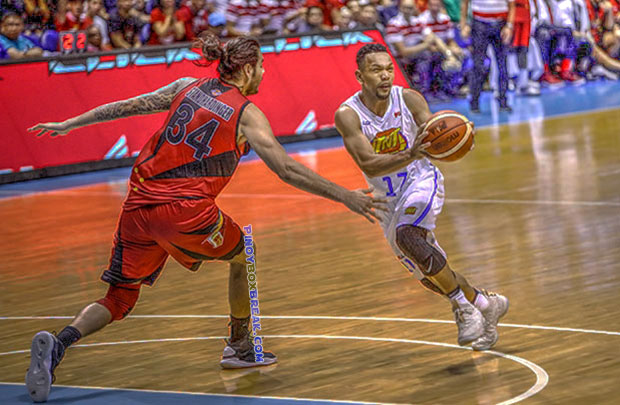