The San Miguel Beermen is scheduled for a best-of-three quarterfinals match against the Talk ‘N Text KaTropa. Game 2 is at 7:00 P.M. on April 8, 2019 live from the Smart Araneta Coliseum.

The KaTropa is now in a twice-to-win disadvantage after failing to secure the victory in Game 1 and the pressure is now up while the Beermen wanted to close the series when the All-Filipino Cup Playoffs round continue in Quezon City.

In Game 1, Talk ‘N Text immediately unleashed their choking defense in the opening quarter. As a result, the team of coach Bong Ravena had an early control of the game.

As expected, TNT relied on their up-tempo style of game where they put the five-time MVP June Mar Fajardo looks like ineffective on both ends of the court.

Coach Leo Austria was forced to adjust his lineup as he threw in Kelly Nabong but the Beermen forward quickly was put on foul trouble.

San Miguel then on the tailend of the KaTropa but they were too good on not letting their prey got loose.

Then on the third quarter, the spark plug which SMB head coach Leo Austria was searching was finally found. He’s the former TNT player, Terrence Romeo.

Though struggled heavily in the first three quarter but June Mar Fajardo shown to everyone why he’s the most dominant player in the PBA in this era by scoring the last five points for San Miguel.

RR Pogoy had the chance to steal the victory with a second remaining in the fourth period but his three-pointer unable to find the bottom of the net.

In the post-game interview, Romeo mentioned that he dedicated the victory was dedicated to his friends RR Garcia and Jericho Cruz who are both TNT players. 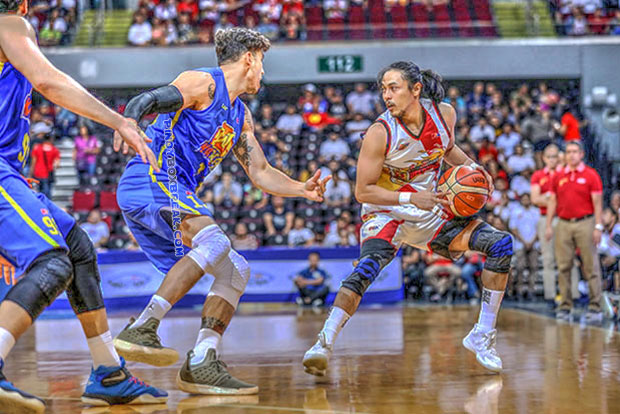