Ateneo Blue Eagles guard Thirdy Ravena teased a triple-double performance as he lead his team attack and capture Game 1 of the UAAP Season 81 Finals against UP Fighting Maroons, 88-79. 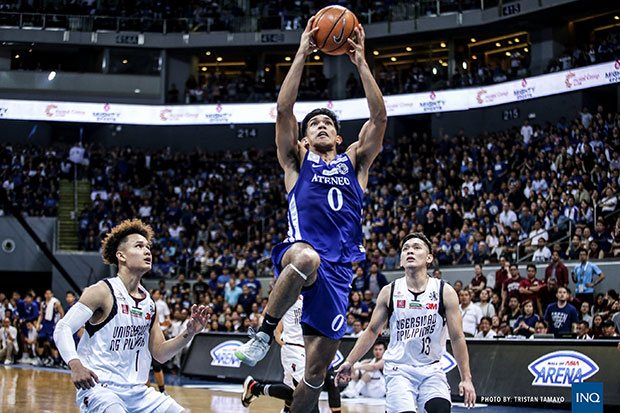 Ravena tallied 21 points 10 rebounds and nine assists in their championship game opener where most of his score came in the first quarter. An indication that he wanted his team to dictate the tempo right-off the start.

His brilliant performance was complemented by his longtime teammate (since their Eaglets years in Ateneo) Matt Nieto. Nieto registered his career-high with 27 points.

In opening quarter it was dominated by the Blue Eagles led by Ravena but when the second quarter came it was time for the Fighting Maroons to respond. The defending champion Ateneo is only leading by a point when both teams head-on to their respective dugouts.

“So coming into this game, we were aware of that, and certainly, UP showed that they really deserve to be in the Finals,” Ateneo assistant coach Sandy Arespacochaga said. “They played well,” he added.

In the third quarter it was a scary moment for UP and its fans as they saw one of their main men fell on the floor of MOA. Bright Akhuetie hyper-extended his leg which caused an intense pain after Blue Eagle big-man Angelo Kouame bumped him.

A scoop stretcher was needed to bring Akhuetie out from the basketball court. Yet, the Fighting Maroon spirit is in the blood of the Nigerian basketballer, he returned to the court in the fourth quarter.

However, that was also the time when Ateneo is building their biggest lead in the game. Nieto went unstoppable from outside as he nailed three-pointer after three-pointers.

“We just did our roles,” said Ravena. “They had runs, we had our runs. Pinakita talaga nila na deserving sila sa finals. At the end of the game, breaks of the game na naka-alagwa kami ng huli.”

“It was a tough, tough game, so I wanna praise UP for that game,” he added.

Jun Manzo kept UP in the game as he led the Fighting Maroons in scoring with his 19 points along with his 4 rebounds and 4 assists. Juan Gomez de Liaño chipped in his 17 points and nine rebounds, he also had a woeful six turnovers.

UP team captain Paul Desiderio was only limited to five points but was active on other departments. He added six rebounds and eight assists.

Game 2 of Ateneo vs UP is scheduled on Wednesday, December 5 at the Smart Araneta Coliseum.

Ateneo vs UP Box Score