Classes for both public and private schools are suspended in select areas on Tuesday, January 14, 2020 due to the eruption of Taal Volcano. 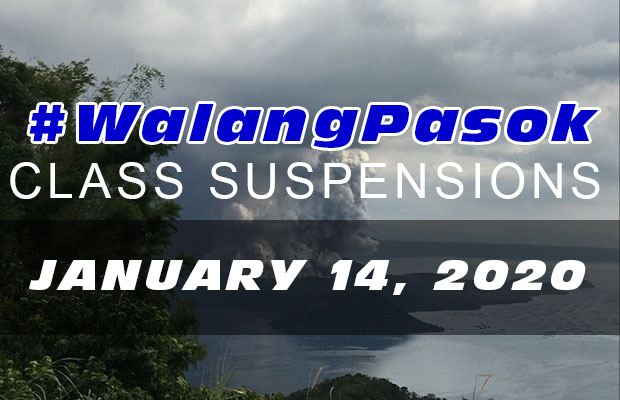 ANNOUNCEMENT: As a precautionary measure, Mayor Menchie Abalos suspends classes in all levels (both public and private) tomorrow, Jan 14, 2020. #WalangPasok

BREAKING: As a preventive measure in view of recent ashfall activity, Manila City Mayor @IskoMoreno has ordered the SUSPENSION OF CLASSES in all levels, public and private schools, in the nation's capital on January 14, 2020#AlertoManileno pic.twitter.com/hrcQxqE9e3

Because of this condition which continue to pose health & safety hazards to the public,the Taguig City govt. is SUSPENDING CLASSES in ALL LEVELS (BOTH PUBLIC & PRIVATE schools) TOMORROW,JAN.14,2020, TUESDAY in Taguig City.@gmanews @ABSCBNNews

Class Suspension: Taal Volcano is still on Alert Level 4 due to its continuous eruptive activity. As such, (cont) https://t.co/beGRDlfaDQ

According to the news bulletin of Philvolcs released at 8:00 AM this morning, the alert level remains at Alert Level 4 which means that the hazardous explosive eruption is possible within hours to days.

In their 4:00 PM bulletin, the said alert bulletin is still the same.

“After a brief waning of activity following lava fountaining at 2:49-4:28 AM today, Taal’s eruption resumed immediately with weak sporadic lava fountaining and hydrovolcanic activity at the Main Crater that generated steam-laden plumes approximately 2km tall. New lateral vents were observed to have opened up on the northern flank where short 500m lava fountains emanate,” mentioned in Phivolcs update.

The government agency also advised the public to wear N95-grade facemasks to avoid inhalation of ash.

“Affected populations are advised to avoid inhalation of ash and use N95-grade facemasks or wet cloth or towel when going outdoors. Motorists are advised to drive with extreme caution as ash can cause poor visibility and, when wet, can make roads slippery.”